I am ready to admit that I’ve become a lazy blogger. I’ve sat down numerous times over the past month to write a blog post only to get on Twitter instead. I’ve written one (1) blog post in the last three weeks. Zero (0) since 2014 actually began. Wednesday came and went and blog friends told each other What’s Up*, while I couldn’t even muster the energy to comment on Facebook status updates.

I’d been blaming the holidays, which was working for me until they came and went and now it’s mid-January and I still just don’t feel like it. In fact, I’m only writing you now to avoid working on my current multiple projects and many pages of reading I need to get to.

And as I write this post, I’m deciding it’s all OK. It’s not ideal for a writer who blogs to be unwilling or disinterested in blogging. It’s not normal for me to feel quiet and introspective, but not want to seek camaraderie and validation from the internet.

It’s not acceptable for me to feel spent after 140 characters unless fueled by utter nonsense. 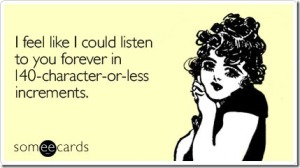 Last night I live Tweeted the Golden Globes. (I know, I seek to bring you the truly important stories.) I simultaneously had an in-depth conversation with fellow Downton Abbey fans about Tom Branson and a set of frowsy pajamas he wore in Season 2, which segued into stunned horror over the events of last nights episode. (Anna. I can’t.)

While others shared their 2014 Word-of-the-Year, I’ve remained relatively quiet. My goals, hopes, prospects, plans were not verbalized nor itemized. My to do list has not been written. My expectations for the year ahead has not been boiled down into a single word that will haunt me all year and remind me come December 31 how very wrong I was at it’s onset. How every unpredictable life is. How absolutely odd and weirdly wonderful things become while you’re working for something else. 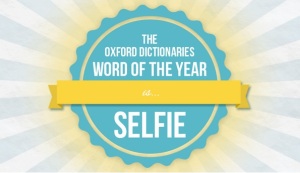 This is not me bragging, or being snotty. I’m not melancholy. I’m not disinterested. I am at the threshold of a darkened room and I’m being told not to turn on the light. So I don’t try to describe the room. I don’t try to see in the dark.

So, my first blog of this new year is about how I haven’t wanted to blog much in the new year. How I can’t seem to talk about my goals or my hopes because somehow, and superstitiously you might say, I also don’t want to look straight at them just yet. How I spend far too much time on Twitter and expend inordinate amounts of energy worrying about fictional characters on British television shows. How this is me processing, and it is productive, if slightly insane, but anyone who’s with me, raise your glass.

And maybe now I’m talking about my goals by not talking about them. Maybe I’ve defined my word without naming it. And maybe you can do the same thing and we can not talk about it here, together, finally giving us the courage to turn on that light, and blinking, describe what we see inside.

Maybe now we (points to self) can all just get to it.

*What’s Up Wednesday is a weekly meme to keep in touch with blog friends, share books recommendations and writing goals, and generally socialize on the internet.

2 thoughts on “Almost Inspirational in the New Year”