What’s Up Wednesday is a weekly meme geared toward readers and writers, allowing us to touch base with blog friends and let them know what’s up. Should you wish to join us, you will find the link widget at the bottom of Jaime’s.

I want to preface this by saying, it’s been a hell of a week.

I finished Throne of Glass. I would like a moment of silence to relive some of the spine-tingling feels this book delivers. (Closes eyes and thinks about Chaol, Celeana, and Dorian. Wanders into daydreaming where I am an assassin with killer hair and cat-like reflexes who captures the interest of two beautiful men.)

OK, I’m back. I then decided to read Austenland by Shannon Hale. I love Jane Austen, and Mr.Darcy is still possibly one of the most swoony literary men ever, so this book naturally appeals to me. In much the same way I adored and devoured Bridget Jones’s Diary, I fell headlong in love with Austenland. It’s a quick read at 208 pages. It’s laugh-out-loud funny at times, and it delivers the romantic goods. I haven’t read an “adult” book since The Rules of Civility last year, but this book was exactly what I needed in the midst of my crazy week. It was an escape, just as Pembrook Park is for the heroine Jane, and one I was grateful for.

The film adaptation was recently released, and it looks like a blast!

Hmm, what am I not writing? Last week we wrapped the first installments on our web series, now officially titled SUPER TV SHOW. Riding the high of this, the crew and I decided to take a chance on producing our own short film. This film project is one I have had in the works, in varying and evolving forms, for almost seven years. It’s a project I very much believe in. Next week we will launch a Kickstarter campaign to raise funds. I will share all that information as soon as I have the link for it. I am ridiculously excited. Along those lines I’ve been writing proposals, rewriting the script for filming, and sending emails to contacts in the locations we need permission to film in. For instance, we want to use a historical cemetery as one location. There is a Cemetery Board that must approve. It’s morbidly fabulous.

I also made some progress on my WiP, bringing in another 1500 words. I love this story, and now I am doing more in-depth research to flesh out the world-building. I also have some alpha readers who want to know where the hell my next pages are. Sorry!

We went to a small town to scout locations and shoot our Kickstarter video on Sunday. We ended up drinking wine in an eclectic antique store with the shop owner, a film buff who studied molecular science, and talking about Fellini. We also caught most of it on film.

The support of the writer community here and on Twitter. When I shared my experience with rejection last week, the response was overwhelmingly encouraging  and edifying. I am always impressed by you.

What Else I’m Up To

My son has been sick with swimmer’s ear and some kind of stomach bug. He also seems to be going through some sort of terrifyingly early pre-adolescent hormone surge. He screams, cries, and pits his will against mine at regular intervals throughout the day. His birthday was today — but his party is Saturday — and for the most part it was a lovely day. I made him a special breakfast, took him to a playground, and spent the afternoon watching Power Rangers Jungle Fury (only available through random vendors on Amazon, so it was a birthday present) with him at my mom’s house. I also had to threaten him repeatedly with time outs and loss of privileges if he didn’t put on his listening ears and get in the damn car. (I did not cuss at him, but in my head there was a string of expletives.) Children are a blessing. And so is alcohol.

I entered the “Agent Inbox” contest through author Krista Van Dolzer’s website. You should all visit the contest, which should be up some time today, and tell them how amazing Post #9 is. Plus, if you are at all curious to find out what my book is about, this is a good opportunity. I have never shared this much information about it on the internet. It’s feels scary.

Last night I went to the midnight release of The Mortal Instruments: City of Bones. First of all, wow, I am a major fangirl and really too old to be out so late. (Though, when I lived in NYC I spent quite a few wild nights out until 3am. But I was an idiot.) Second, the movie was a little disappointing, but Jace Lightwood in the flesh wasn’t. 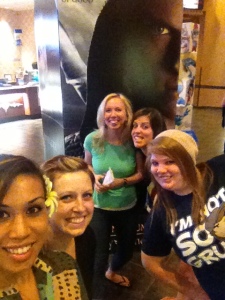 The most fabulous part of our late, late night was during the previews when this happened: 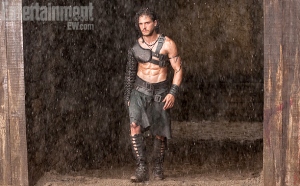 I honestly can’t tell you anything about the teaser trailer that followed this shot. Pompeii comes out February 28, 2014, and I’ll be there. I have already exstensively searched the internet for the teaser trailer from last night with no luck. If you happen to stumble upon it before I do (and I promise, you will know when I do) please Tweet me or post in comments.

Happy Wednesday! Now, if only I could take a nap.

14 thoughts on “What’s Up Wednesday”