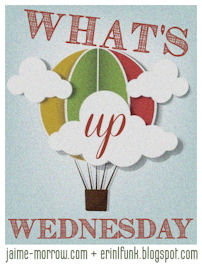 What’s Up Wednesday is a weekly meme geared toward readers and writers, allowing us to touch base with blog friends and let them know what’s up. Should you wish to join us, you will find the link widget at the bottom of Jaime’s.

I finished OCD Love Story by Corey Ann Haydu. As I said last week, that book brought up a lot in me. It is worth reading, and it left me feeling hopeful if slightly twitchy.

I am reading another ARC now. (I have racked up the ARCs lately, yay for well connected friends.) Anyway. Currently reading Tandem by Anna Jarzab. I know I love it because I am soaring through it, however, there are things I feel odd about in it. Mostly, POV switching that is a little jarring at first and then a little cop out. I like Sasha, and the plot and concept is riveting, but it’s romantic lead Thomas that does it for me. I recommend giving it a shot when it releases in October!

Still working on my sequel, though haven’t touched it in a few days because the other idea I began has taken over. It’s OK, because I am under no current pressure to make headway on the sequel. I just wanted to know I could and start messing with how.

The new WiP is sort of consuming all my waking thoughts right now. I had a banner day Monday, getting close to 4500 words written in one day. Tuesday (even though I was caring for my son and running errands) I managed to squeeze out another 1500 words. Son took a nap because he was up a lot during the night with unknown worries and fears, and so I made him rest in the afternoon. This gave me more writing time than I expected, but then I had to reluctantly wake my son to prevent him staying up until midnight. I am filming today, which will impede my progress, but that is a productive use of time.

Pictures from Hawaii. From time to time, I am reminded that I was there and it was magical. Also, my WiP kind of has something to do with it.

Family Stories. Last weekend, I traveled with my husband’s family to the Austin area. A few weeks ago, my husband’s mother discovered she had an older half-brother. Her mother had given birth to a son who had been adopted before she married my husband’s grandpa. My mother-in-law didn’t know this had happened, but when her mother told her that she had a brother, my mother-in-law was overjoyed. Watching the family open themselves up to this new person, his daughter, his wife, and his grandkids was an incredible experience. Seeing the power of this revelation in my husband’s family manifest without judgement or bitterness, was an incredible example of the kind of people they are, and the kind of legacy passed down to my husband and his siblings.

What Else I’m Up To

Filming. Today we have seven scenes to shoot in about 3.5 hours. I will be powering through, drinking coffee and diet coke, and probably doing a lot of sweating. Wish me luck!

Catching bugs and things. Monday I caught a tiny lizard for my son, which he – in an incredibly humane gesture for a nearly four year old boy — let go the following morning.

Staying out of the sweltering Texas heat. I feel like God is baking us into a cobbler to serve with ice cream at the church pot-luck. I saw the first glimpse of fall clothes at Target yesterday and wanted to cry, but decided to sweat instead and then buy an ICE-E.

Fangirling hard over this clip from The Mortal Instruments: City of Bones. Oh, the FEELS! Oh, the boy! Oh, Lena Headley not playing Cercei!

13 thoughts on “What’s Up Wednesday August 7”