As I have said, I am working on a Young Adult novel. It’s going so well right now — even though I’m sleep deprived (more on that later)— that I felt compelled to share a little bit with you. It’s not a deeply revelatory passage, but I love it, have edited repeatedly, and love it still.

Lately, my son has not really been sleeping much without my input. This is not something I have ever really responded well too, and I think it’s because I refuse to nap. Even when Samuel was a newborn, napping for me was nearly impossible. I could have been falling asleep at the kitchen counter whipping eggs, but still, no nap. I blame my brain. My brain says, “Night is for sleep, not day.” So, even now, I find myself sitting on my couch in front of the computer writing to you all, and not sleeping an extra wink. That’s OK, that’s what coffee is for.

Now, without any more rambling, here is my little sample. Have fun reading and, as always with a blog, feedback is greatly appreciated:

I look down the long, narrow room and out the window. Earlier this summer,  I helped my cousin cut and haul wood from the surrounding acreage to feed the stove in the basement that heats the entire house. There’s no other heat source since electricity was banned, which makes my room maybe the coldest of all. I hate this job more than milking the goats because it means being alone with him, and being alone with him is generally something I try to avoid.

My first time into the woods with him was only a few weeks after arriving on the farm. He walked in front of me, taking long strides that I couldn’t keep up with, an axe hung precariously over his shoulder. I kept stumbling over the unfamiliar ground, and I swear I saw him chuckle once or twice. Finally, we stopped and he dropped the axe to the ground. It hit the rocky earth with a thud, sending a tremor of protest through it.

“You ever cut wood before?” he asked, still not meeting my eyes. I shook my head. He lifted the axe, bringing it to the tree with such force I stammered away.

“Eventually you’ll be doing this on your own.” His voice was solemn. I nodded again as a reflex, knowing I would never do it alone. Knowing I would always wish I could.

A few days ago we ventured a little deeper into the woods— as close to the sign post as we could get without touching it. My cousin was lost in thought as we walked, his body not swaying with its normal swagger, his pace easy for me to keep up with. Then he suddenly stopped, slumping his shoulders and turning his eyes to the sky. I watched his face, the scowl he always wore was absent, and I wasn’t sure if I should remind him that we had a job to do. Then he pulled his eyes away from the sky and trained them on my face, searching it slowly.  I saw the hint of a smile light the irises as they met mine. It was so faint that I spent the next days wondering if I had actually seen it at all. 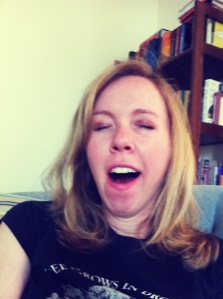